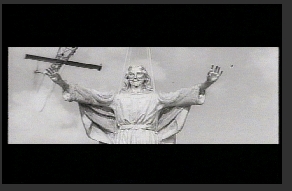 THE STATUE OF CHRIST THAT FLIES OVER ROME

this initial image is a sort of prologue of the film in which the director sums up his philosophy linked to the collapse of the ancient myths and the emergence of more modern ones, but often they are false myths.
The statue of the Christ in gold that flies over Rome from its periphery, that of post-war reconstruction, to get to San Pietro, is nothing but a fake statue, a simulacrum, which will be used to make a film (in this way it also introduces the theme of the eternal city that becomes the city of cinema). Despite being a fake statue that serves for a film, it is brought to the Pope to be blessed. In this way as a simulacrum, it will become a sacred object.
Sacred and profane then intertwine, coexisting together, in the new postmodern world characterized by the presence of false Gods and new Gods 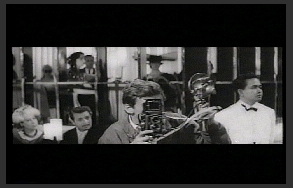 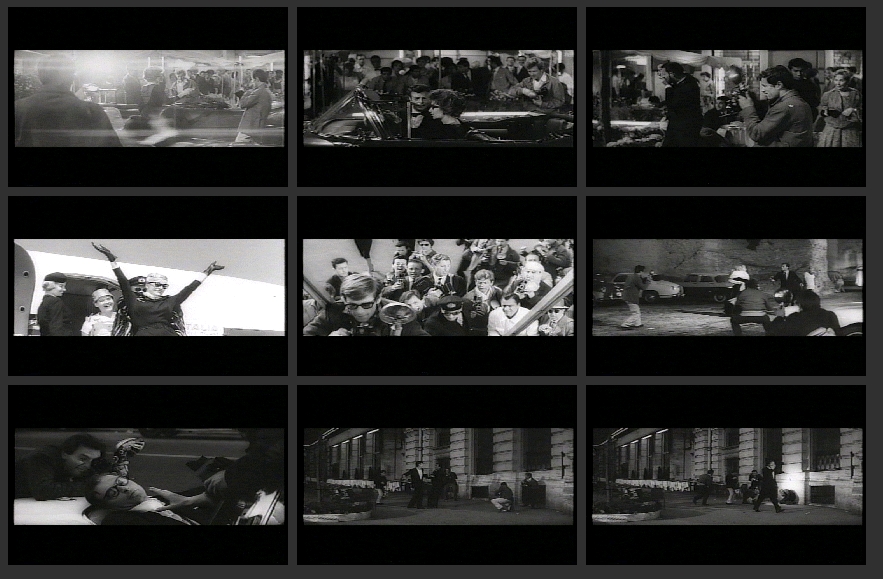 VIA VENETO AND THE PAPARAZZI

via Veneto is the representation of the new “empire”, an empire based on the ephemeral, on the momentary glory given by the show business.
In this way we find the paparazzi, those who tell the new story, a story no longer made of great deeds, but a story of gossip that revolves around heroes no longer “of history” but of “cinema”.
In this avenue there is also the most complete staging, that of life, where on one side there are those who (paparazzi) try to grasp the most intimate aspects of the new heroes in order to “unveil” them to the readers, so that they can live, in a reflected way, the life of their heroes, indeed, of the new gods

On the other hand, we find the new heroes, the actors, who seem to want to escape the cameras, but who actually look for them, because it is thanks to the work of the paparazzi that their glory and their celebrity arrives.
Without the paparazzi they would be nobody because nobody would recognize them.

The decline of the Roman Empire

The Baths of Caracalla, once a place of sacred ceremonies, is transformed into a place of perdition and lust. The ancient rites and ancient dances of the Vestals are replaced by the syncopated rhythm of rock and roll and the wild dances of the modern diva.
And the ancient Romans, with the nobility of their white tunics, turn into waiters. Waiters who serve the new empire, the American one, the one that is conquering no longer with the sword but with well-being, the whole world. But even in this case, it’s all fake, a mask, a simulation of the old too fake. It is indeed one of the American actors who observes how the ornament of the tunics is completely wrong. But it does not matter, we are in the era of the show, in the world built ad hoc for the sweet life.

THE APPARITION OF MADONNA

the children say they have seen the Madonna, but it’s all a joke. But this is not important. It is not reality that matters but it is the event that is also built mediatically. In fact, the protagonists of this scene are not the children and it is not the Madonna. The great circus of television is the protagonist of this scene. A television that organizes and builds the event. A television that does not care to tell the truth but to tell a story. With this scene the director points his accusing finger on the social construction of reality carried on by the media. A reality that is false, but that is treated as true. 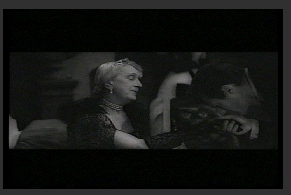 THE PARTY OF HYPOCRISY

Marcello during the party understands that those around him are false friends. He understands that everyone has understood his game, that everyone knows the face hidden by his mask. In fact, they have fun making fun of him for his ambitions as a writer, reproaching him for the fact that he is nothing but a gossip-telling.
And then he too begins to take away the masks from the others but no one actually wants these masks to be destroyed, and the conflict then turns into a big circus parade. The order is restored. And nobody really got hurt. 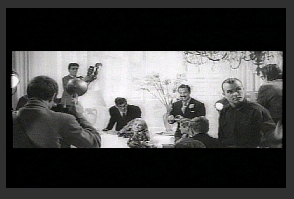 THE GREAT HUMAN CIRCUS
in this social construction of reality, dreams and nightmares, angels and monsters find space. The post-modern society is represented as a great circus, where often, behind the mask of the clown, man’s despair is hidden.
And just as in a circus men perform their show, but once the lights of the show are extinguished, they are alone with themselves. 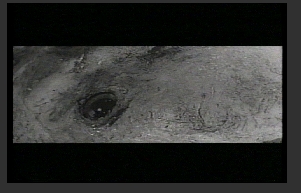 it is the epilogue of the party but also of the film. What is this sea monster that fishermen brought to the shore? It is nothing but the representation of nature. A nature that can be monstrous but is always true. And the group of false friends would like to buy the monster in order to continue to make fun of it. But the fishermen, closer to the nature of them, refuse.